We scored Bluevine and Chase on their banking products, rates, and more. Here’s how they stack up.
Best for most businesses
Bluevine

Chase or Bluevine? Bluevine or Chase? We’re here to help you figure out which has a better business checking account for you.

We used our bank scoring system to grade both Bluevine and Chase on quite a few factors, from their account options to their pricing to their customer service. And in this article, we’ll use our objective comparisons to point out what each bank does well―and what it doesn’t.

Bluevine offers a better online banking experience for most small businesses (thanks to its lack of fees and widespread availability). Some cash-heavy businesses may prefer in-person banking with Chase, though. We’ll tell you about all that―and more―as we compare these two banks.

Bluevine vs. Chase at a glance

Before we get too into the weeds, let’s talk about the biggest difference between Bluevine and Chase: what kind of banks they are.

Chase Bank is a traditional bank, meaning it has brick-and-mortar branches where you can (and sometimes have to) do your banking. Because this is 2022, Chase does offer plenty of options for online banking and mobile banking. But there may be times when you need to visit a physical branch (like to open certain high-tier checking accounts or to apply for business financing).

Bluevine, on the other hand, is an online bank. It has no physical branches―at all―so you’ll do pretty much all your banking on your computer or phone. The one exception? If you need to make a cash deposit. You’ll have to visit a Green Dot location if you want to deposit cash into your business checking account.

So with that key difference in mind, let’s look at how Bluevine and Chase compare in some of the most important areas.

First things first, many more businesses can use Bluevine than can use Chase.

That’s because Chase, as a traditional bank, only does business in certain states―29 of them, to be precise. If you’re in one of those states, great! But if you’re in, say, New Mexico, Tennessee, or Maine, you simply can’t use Chase even if you want to.

Plus, there’s the issue of branches. Even if Chase offers business banking in your state, you’ll want to have a branch close by―not halfway across the state.

Bluevine, of course, doesn’t have any physical branches. Instead, it’s available in all 50 states (as long as you have an internet connection). So no matter if you’re in Alaska, Maine, or West Virginia (or one of the other 47 states), Bluevine offers business checking in your area.

Bluevine also has a bigger ATM network, if that matters to you. While Chase has a decent network of 16,000 ATMs, Bluevine more than doubles that with its network of 37,000 ATMs.

Even if Chase is available in your area, we think you’ll be impressed by Bluevine’s business bank account costs (or the lack thereof).

Bluevine business checking accounts don’t come with most of the fees you expect. You don’t have to pay a monthly service fee (ever) or transaction fees, for example. You don’t even have to worry about overdraft fees. And as the cherry on top, Bluevine gives you two free checkbooks when you sign up.

Then there’s Chase, which charges all the typical checking account fees. You’ll pay a monthly service fee (though, to be fair, some accounts give you options for waiving that fee), transaction fees (after you make a small number of free transactions), cash deposit fees (after you max out your free cash deposits for the month), overdraft fees, and so on.

But given that your Bluevine business checking account comes with hardly any fees at all―no matter how you use it―it’s clear that Bluevine offers the better deal, price-wise.

Chase does have a big advantage over Bluevine: It has way more account options.

At Bluevine, you can get its basic business checking account. It offers 5 sub-accounts to help you divide up your funds better, but that’s it. Luckily, it’s a good business account. But still, you have just the one bank account option.

Chase, on the other hand, gives you a number of business checking choices:

So whether you’re a brand-new business owner looking for a cheap account or you’ve got a big business that needs feature-rich checking, Chase has a business account for you.

You’ll have to decide for yourself whether any Chase business accounts actually offer a better deal than Bluevine’s sole business checking account.

You may have noticed that Chase Bank offers a couple business interest checking accounts. These accounts let you earn interest on your account balance, which make them tempting for many business owners.

So it’s worth noting that Bluevine business checking can also earn interest―and we have reason to believe it earns a better interest rate.

Bluevine accounts earn 1.5% APY (annual percentage yield) on balances up to $100,000. That’s a fantastic rate―the highest we’ve seen from any business bank, in fact. Plus, it applies to sub-accounts too.

Now, starting in May 2022, you’ll have to do one of two things to earn that interest rate:

That’s a bummer, but it’s also pretty doable for many small-business owners. And again, the 1.5% interest rate is unbeatable.

But how does that compare to Chase? Well, Chase doesn’t publish interest rates on its business checking accounts―not a good sign. But based on the rates we’ve seen for its savings accounts, we don’t expect Chase business accounts to earn much interest. And don’t forget, you’ll have to pay all kinds of account fees (including unwaivable monthly fees) to use one of Chase’s interest-bearing checking accounts.

In other words, if you want to earn a great interest rate, we suggest going with Bluevine.

As you can see, Bluevine has quite a few advantages. But Chase does have more upsides we want to make clear―and that’s the number of branches.

Like we mentioned earlier, Chase has 5,000 branches across 29 states, while Bluevine has 0 branches.

For some small-business owners, that doesn’t matter much. But if you have a particularly cash-heavy business, for example, you might prefer to deposit your funds at an actual bank with an actual bank teller. Or you might just like the feeling of doing business in a branch you know with humans who can help you (rather than fiddling with a buggy app or a website).

Simply put, if you’re the kind of business owner that prefers a brick-and-mortar business banking experience, then understand that Chase has (way, way) more branches than Bluevine.

At this point, you might still think Chase sounds okay. But we want to be very clear about this last thing: Chase has a very, very bad reputation.

Take customer reviews on Trustpilot. Bluevine earns a pretty respectable 4.4 out of 5, while Chase earns a measly 1.4 out of 5.1, 2

So why the difference? Well, Chase has a history of acting in scammy ways. As we detail in our Chase business banking review, Chase has been accused of quite a few bad things in recent years:

Seriously, Chase’s reputation is bad enough that we don’t recommend it. If you really do want to go with a physical bank, we recommend other banks (like Huntington Bank, TD Bank, Citizens Bank, and others) or your local credit union.

Or, of course, you can go with Bluevine. It may not have perfect reviews, but Bluevine has a much better reputation than Chase does.

Some small-business owners might still be interested in Chase Bank, due to its many business account options and its number of branches. But with its horrible reputation, we recommend choosing other banks or credit unions over Chase―even if you don’t go with Bluevine.

We graded Bluevine and Chase on a dozen different factors, including their availability across the nation, typical account fees, account options, customer reviews, and more. Then we calculated overall scores for both banks, which we used to guide our comparisons throughout this article.

Yes, Bluevine banking and Bluevine lending are legitimate. Bluevine has thousands of very positive reviews from customers on Trustpilot.1

What bank is better than Chase?

Most banks are better than Chase Bank, honestly.

If you want an online bank, we specifically recommend Small Business Bank, Bluevine, and LendingClub Bank (which you can read more about in our guide to the best online business bank accounts).

If you prefer traditional banks, the best option will depend on where your business is located. But generally speaking, we like KeyBank, Citizens Bank, TD Bank, Huntington Bank, and SunTrust―all of which we review in our rankings of the best banks for small business.

What bank does Bluevine use? 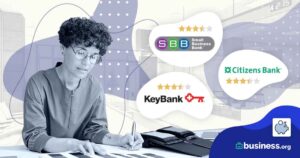 By
Chloe Goodshore
10 Best Banks for Small Business 2022
We compared more than 30 banks to bring you our business banking ranking. Best small-business... 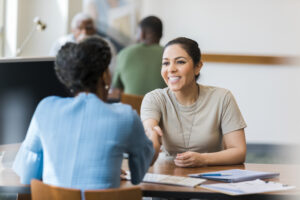 By
Chloe Goodshore
Aspiration Review 2022
Curious about Aspiration Bank and its promise of climate-friendly banking? Business.org reviews Aspiration, including its... 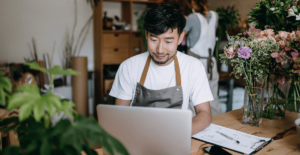 By
Chloe Goodshore
Best Online Bank for Small Business in 2022
We compared checking accounts, savings accounts, and other banking services at more than two dozen...

By
Alex Kerai
What You Need to Know About a Cashier’s Check
Have you always wondered what a cashier’s check was but were too afraid to ask?...