Here's what we learned. 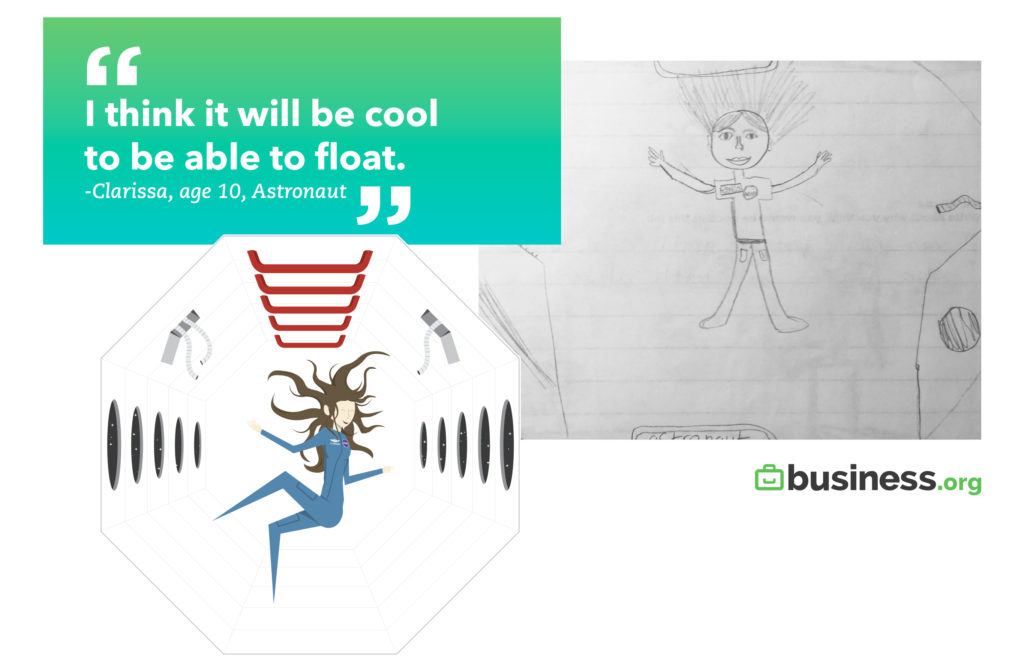 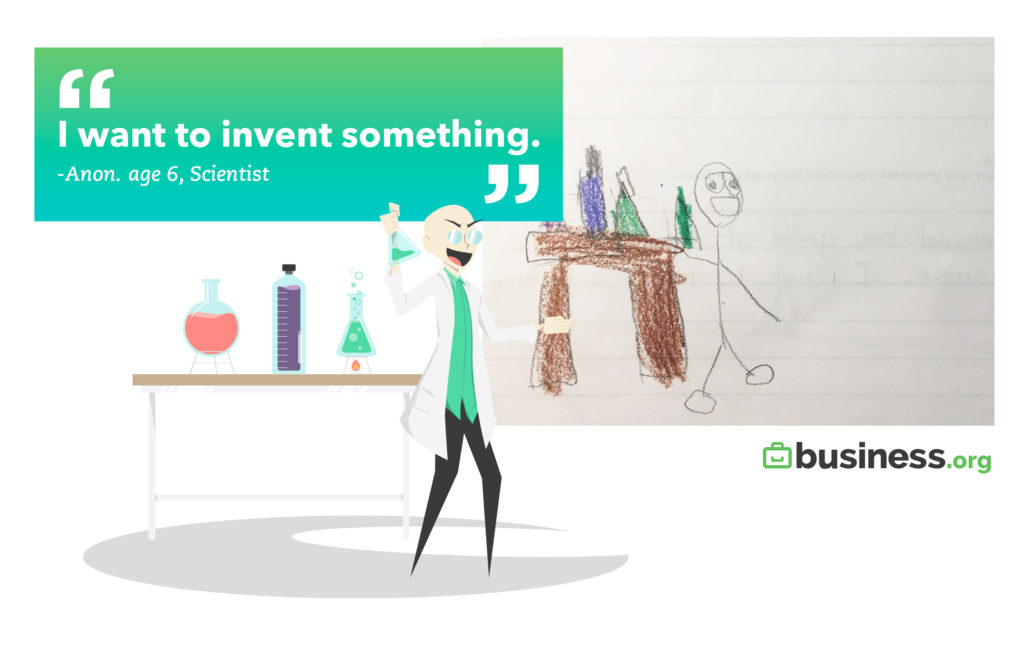 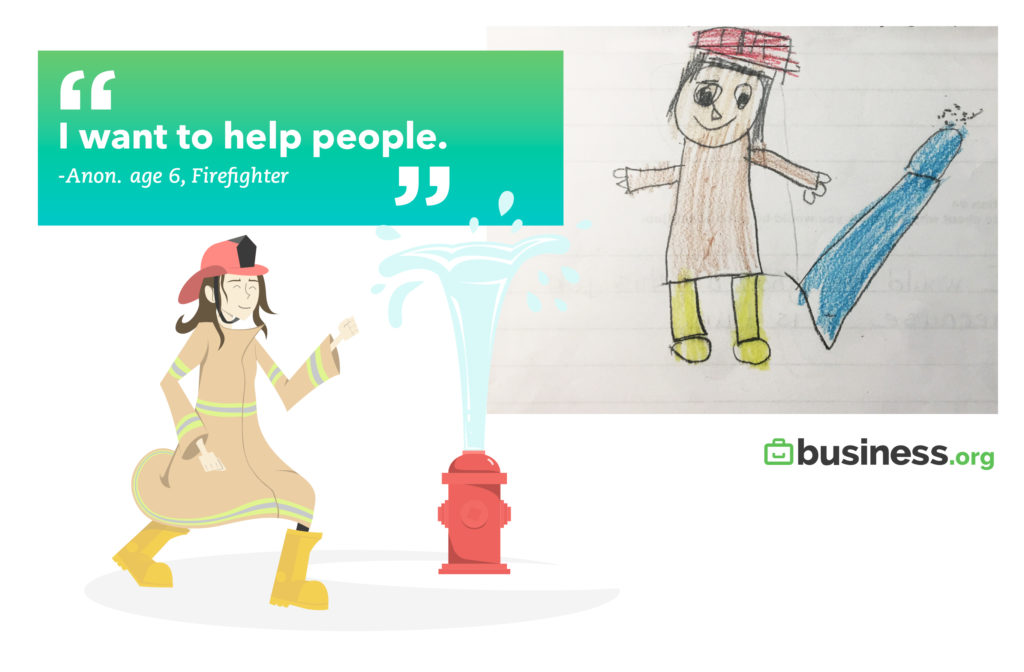 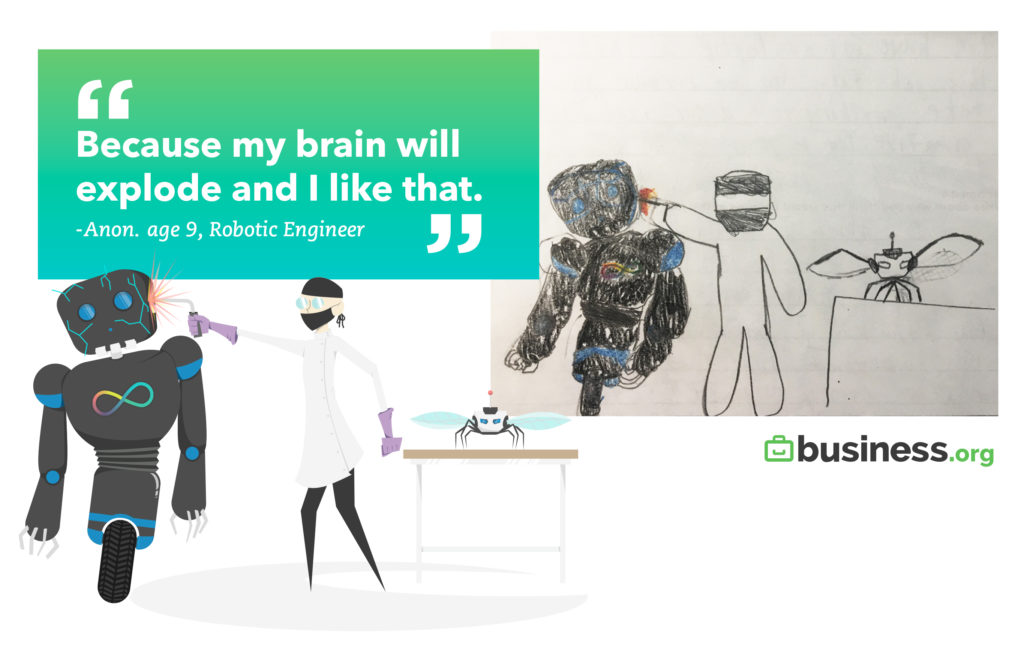 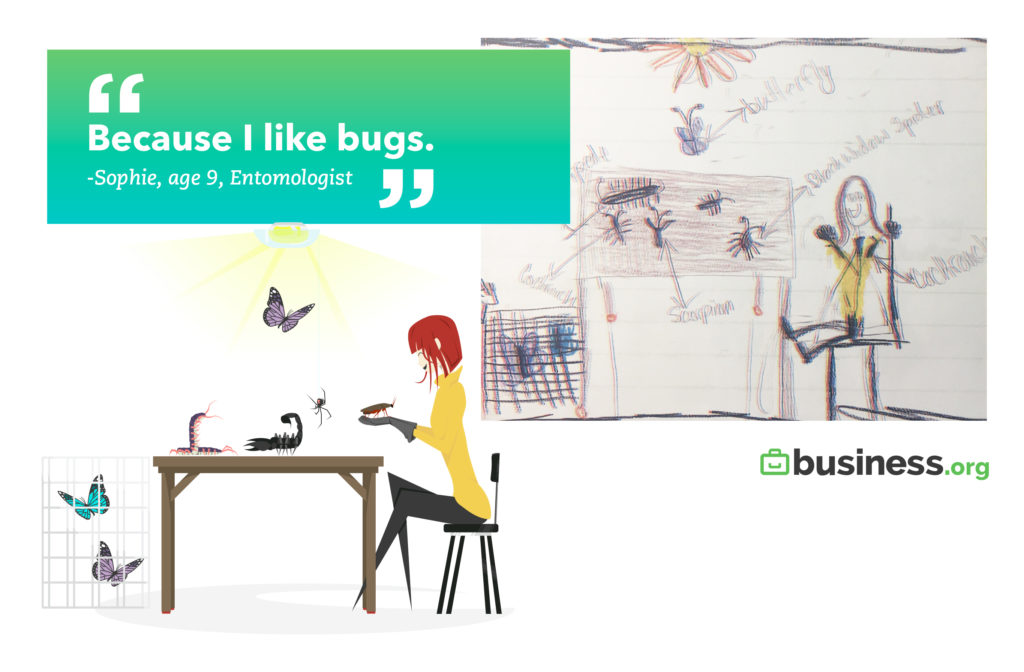 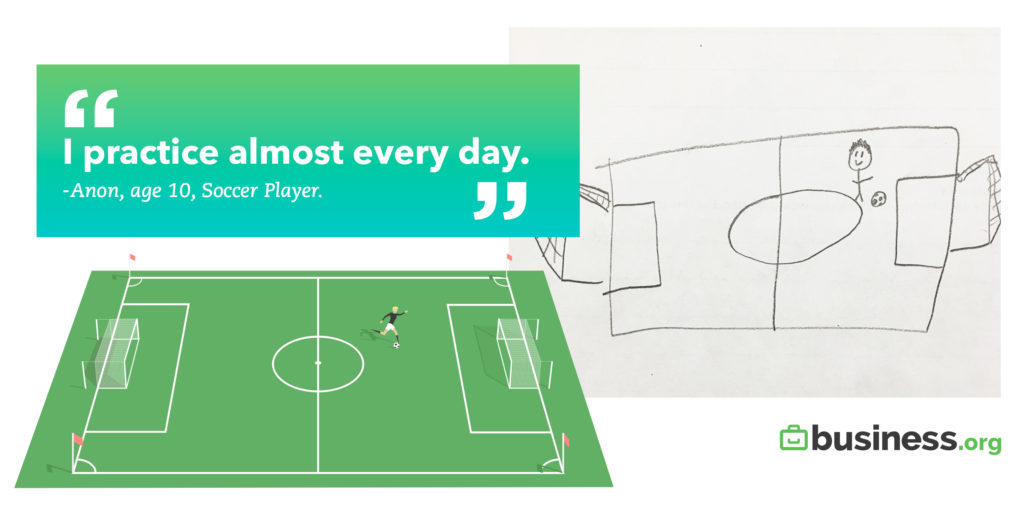 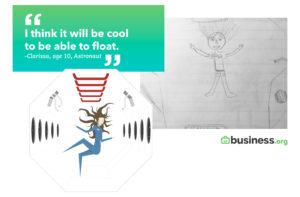 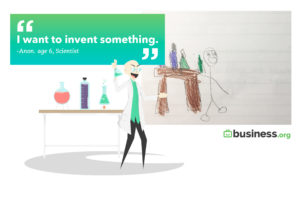 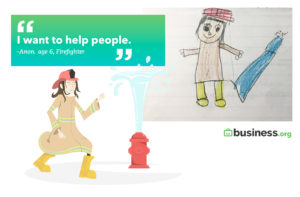 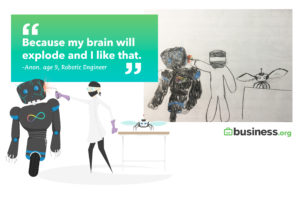 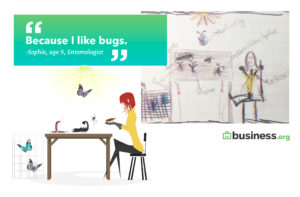 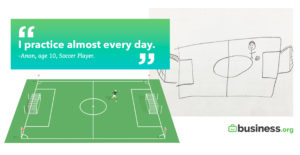 Age 8–9: Interest in STEM, athletic, and creative roles on the rise

By the time children hit age eight, their interest in service roles dramatically decreases (from over 70% overall to just over 22%). Dr. Saline explains why:

“As kids age, it’s not that they want to be less helpful. They just become more interested in themselves and their own lives. The direct praise and the good stuff that comes solely from helping . . . there are other ways to get that.”

But according to Dr. Saline, this shift toward creative roles (like writers, artists, and musicians), STEM roles (like scientists, doctors, and tech developers), and athletic roles could have something to do with changes in education around age eight.

“In the early grades, you learn to read. You learn a facility with numbers. You learn to do math. And you learn the actual physical act of writing and taking ideas about your life and putting them down in story form,” she explains. “Around fourth grade, there’s a shift where you read to learn. You use math for higher-level problem solving, and you write to express and synthesize ideas. So it would make sense that when kids are nine or ten, there’s a consolidation that happens cognitively at that time where they’re now shifting their thinking.”

And then, of course, there’s the fact that a lot of kids in the eight- to nine-year-old range begin to build their own identities, and they start to compare themselves to their role models. 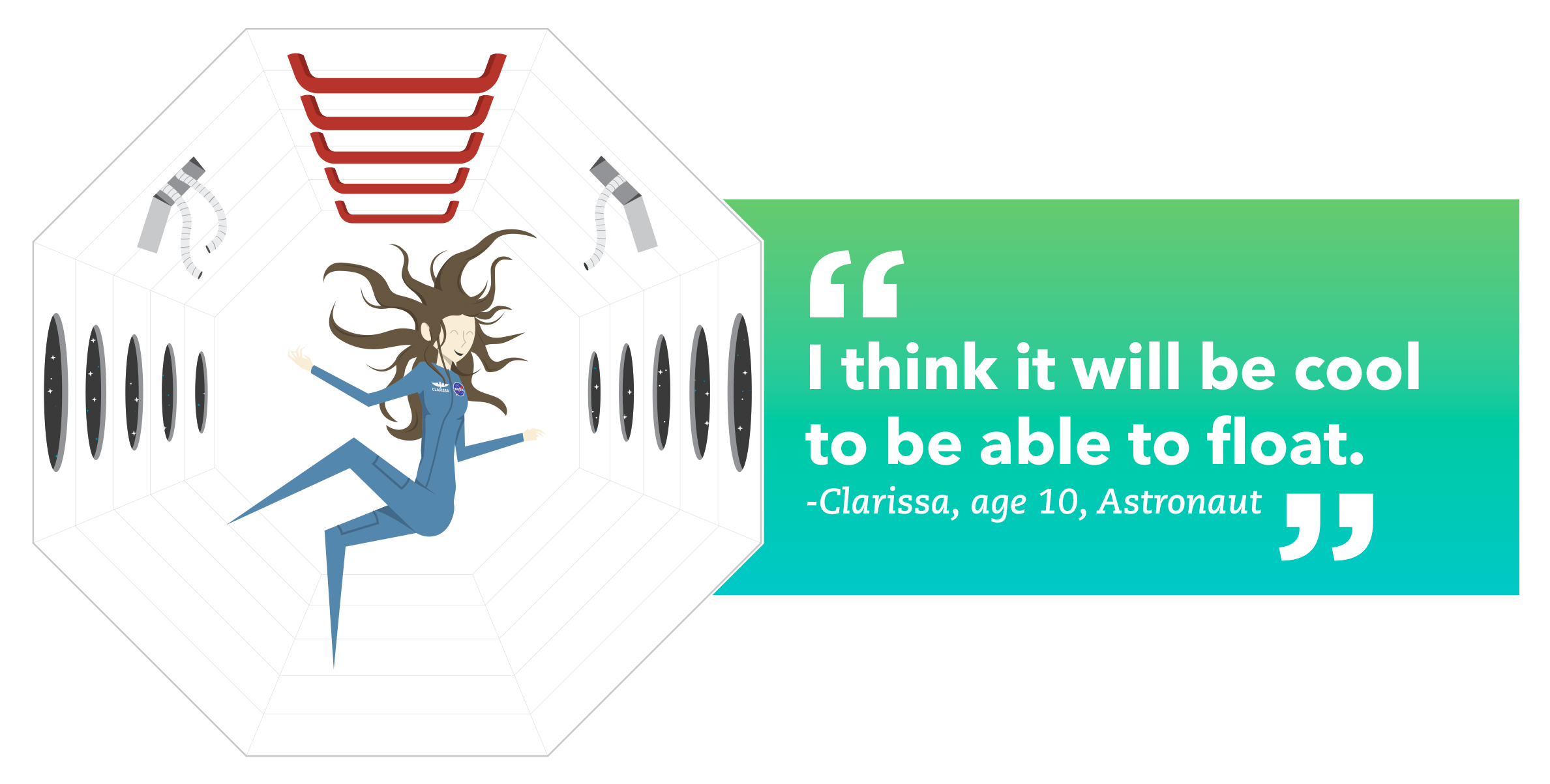 As children mature, there’s another phase of development where kids begin to have a more individualized way of thinking. This changes how children view careers and which jobs they gravitate toward.

“Kids enter what Erik Erikson called the Age of Industry vs. Inferiority,” Dr. Saline adds. “They actually start to realize that they themselves are good at doing things. And they want to lean into and spend more time with the thing they’re good at.” 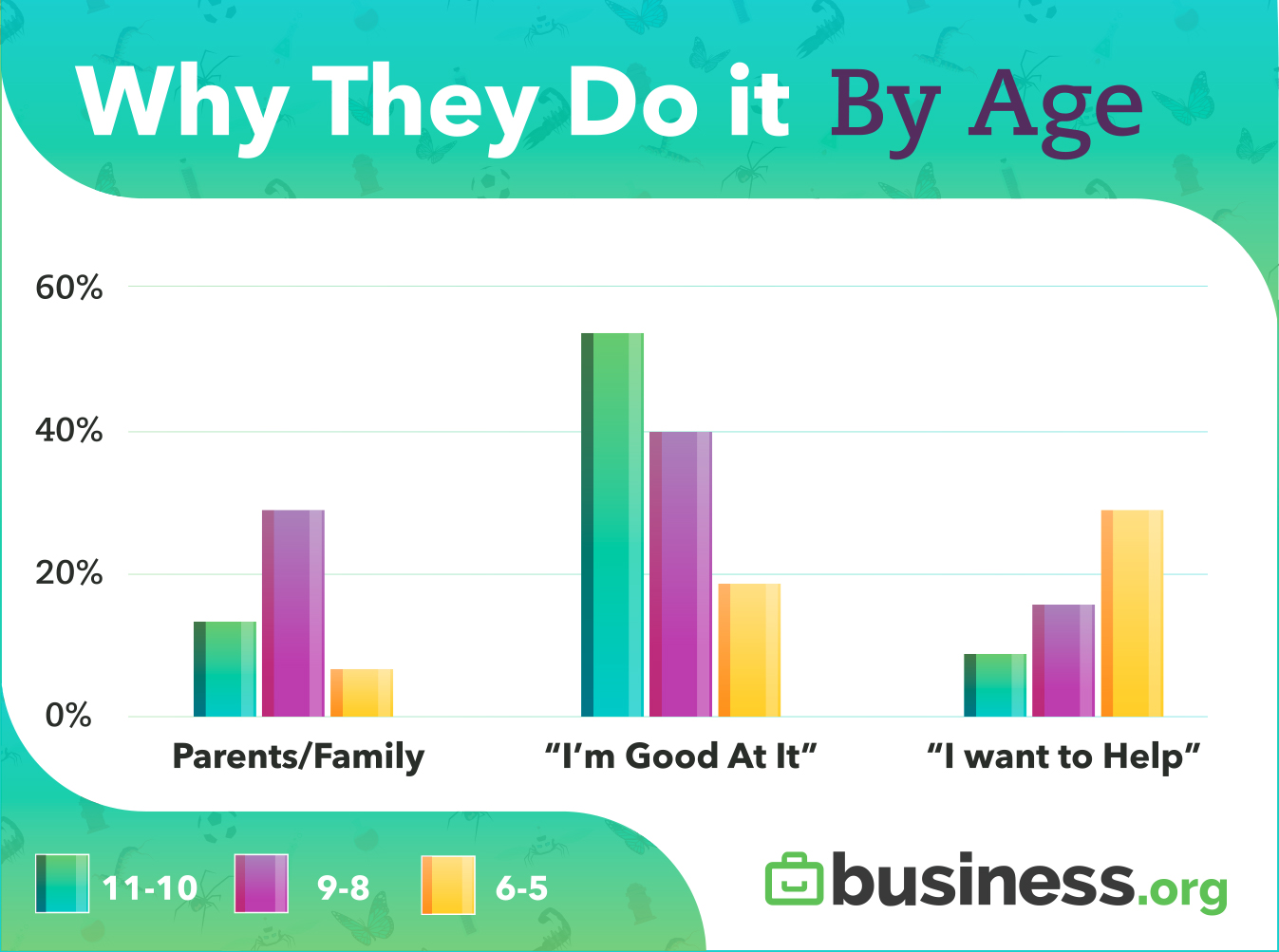 That’s partly why we were excited to see that girls in the ten- to eleven-year-old group were more likely to choose a STEM-related dream job than boys in the same group: it shows that girls at this age are getting validation that they are, in fact, good at science, technology, engineering, and math.

So are recent initiatives to get more girls into STEM working? Dr. Saline thinks so.

On the flip side of that, of course, is the fact that fewer boys are interested in STEM at the ages of ten and eleven than they are at eight or nine.

“That may have to do with certain fantasies about masculinity in our society that boys may become more aware of when they’re nine or ten than they are when they’re six or seven.”

Speaking of masculinity, our small study found that kids’ understanding of gender roles may actually have a big impact on the careers they want.

On the one hand, we found that across the board, girls chose creative dream jobs (like acting) more than boys. Meanwhile, boys chose service roles (like military service) far more often than girls. 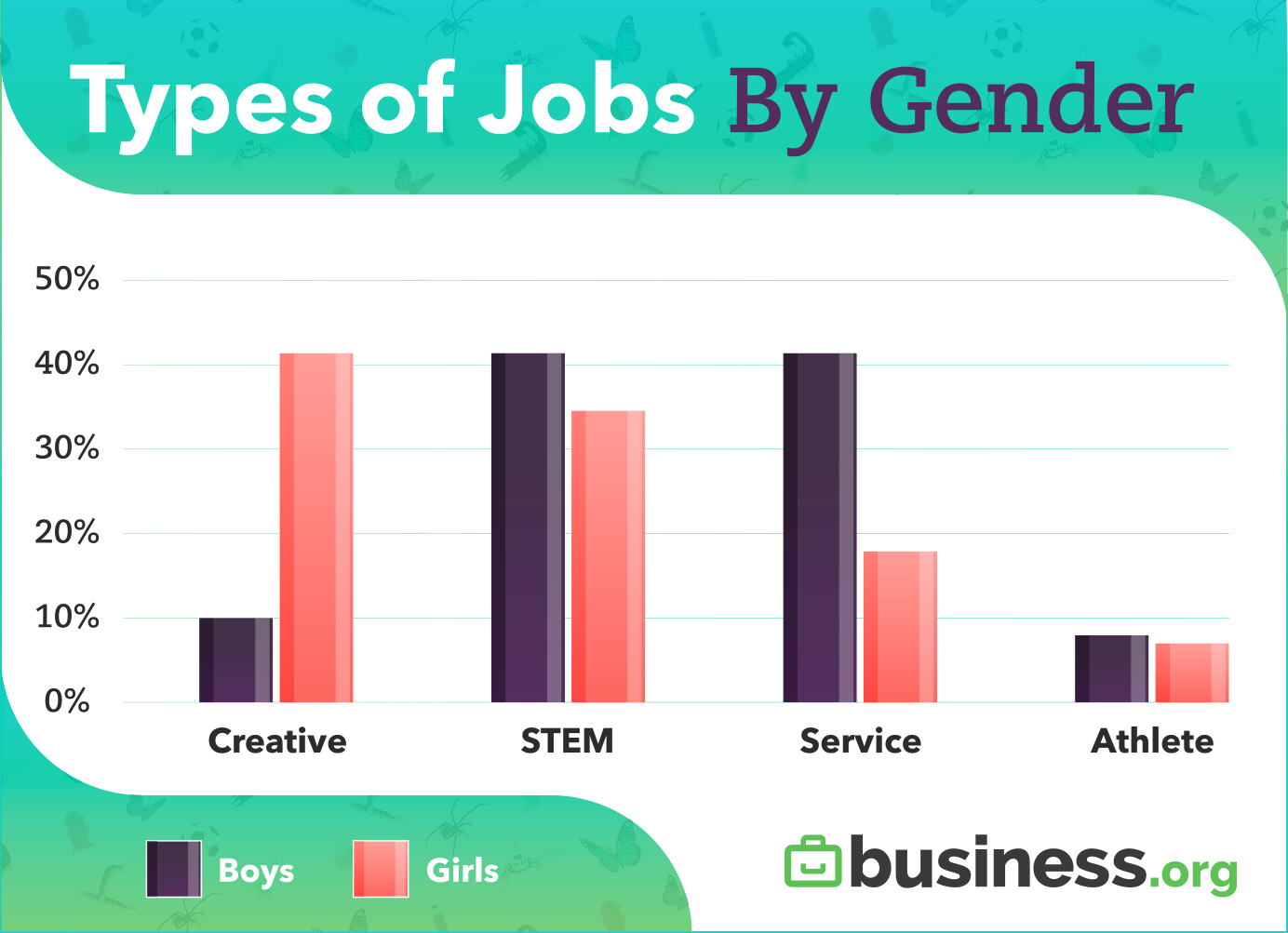 “Research has shown in many cultures that by the age of two, boys are more physically aggressive than girls. And it depends on the child, but often you’ll see male toddlers focusing more on gross motor activities, and girls will have a little more proficiency and interest in fine motor activities (as well as some of the gross motor),” says Dr. Saline.

At the same time, though, Dr. Saline explains that these tendencies may or may not be “natural.” Instead, they may be caused or amplified by how boys and girls are treated by their parents and other adults.

“We may consciously or unconsciously encourage girls to draw, or bead, or play with figurines or dolls or Lego[s]. And we may encourage boys to do those things, but we may also be encouraging them a little bit more to play sports or run around outside.”

And of course, girls’ lack of interest in service roles can also be blamed on the examples they see in the world around them.

“Although we use the term ‘police officer,’ ‘firefighter,’ and ‘train conductor,’ what kids see in their daily lives is that those people are mostly men. Even in my town, where the chief of police is a woman, most of the officers are men. So if that’s who you’re seeing doing jobs, then that’s what you’re going to associate with that job.”

Fortunately, it seems that many girls aren’t letting that hold them back. In fact, we were thrilled to find that with age, the girls in our study developed an increasing interest in STEM. 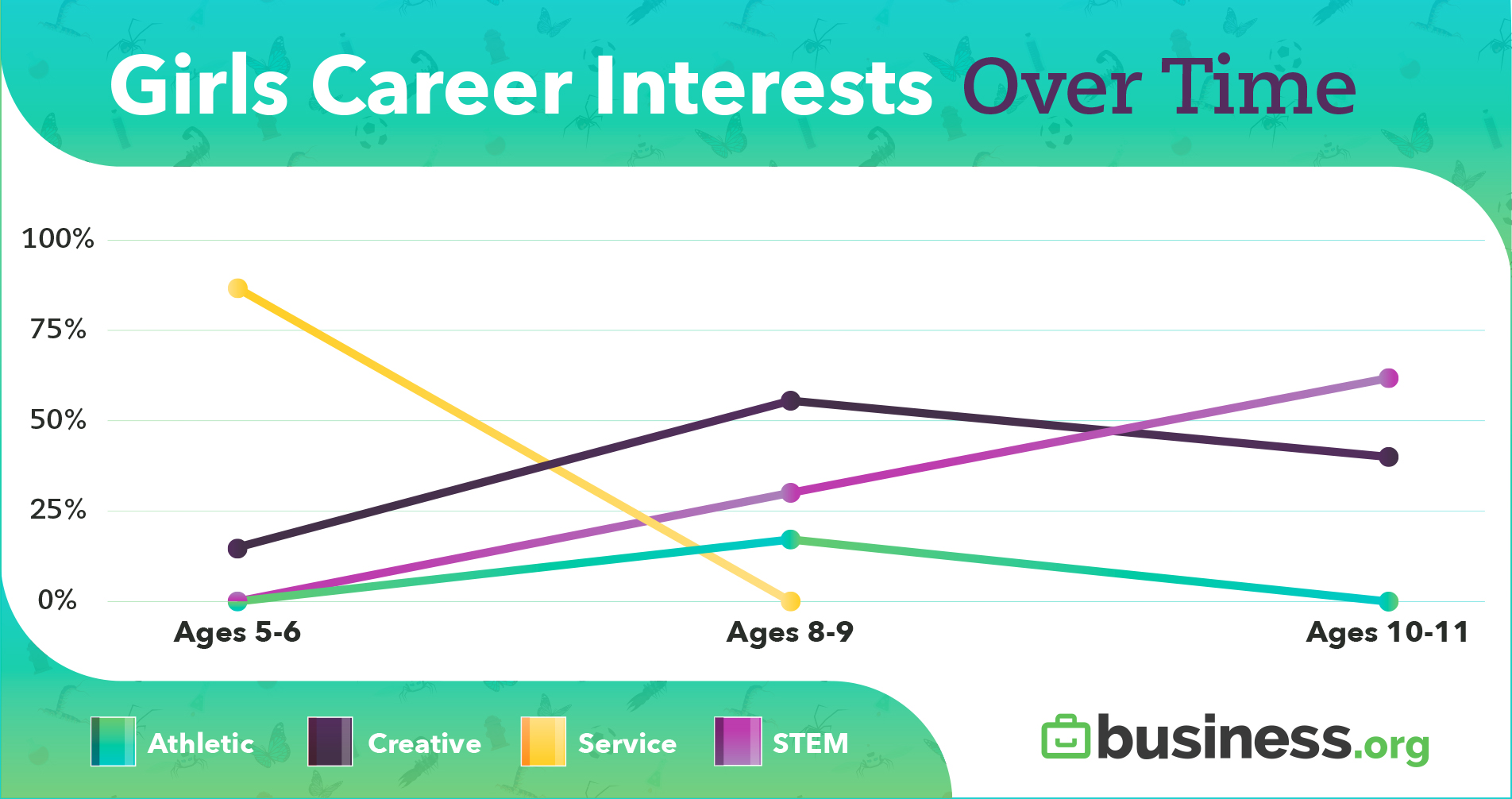 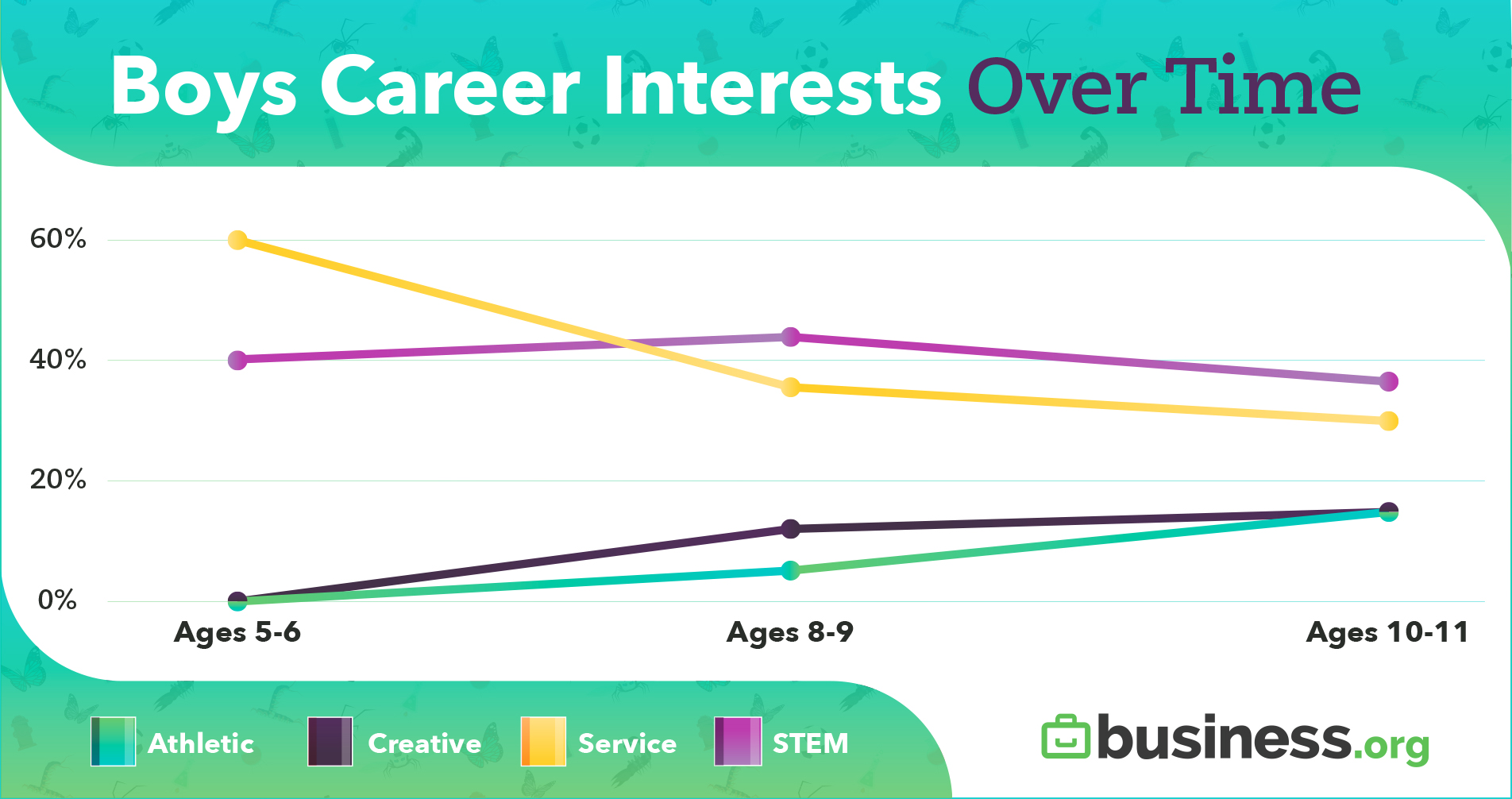 We also noticed that while boys’ interest in creative roles increases as they get older, it doesn’t grow at nearly the same rate that girls’ interest in STEM grows.

Unfortunately, the answer is probably no. According to Dr. Saline, traditional views on masculinity still play a big part in boys’ professional goals.

“The code of masculinity is fairly rigid. While it’s more flexible than it used to be, when boys head into puberty, they’re more aware of traditional male roles and behaviors. What most cultures (including ours) value about masculinity revolves around strength, performance, proficiency, and dominance.”

Dr. Saline continues, “There are a lot of nine- and ten-year-old boys who want to be the next Lebron James, Adrian Peterson, or Dr. Dre. They are much more focused on being a successful sports figure or musician than they were before because those professions speak to their developing interests, and those professions are perceived as 'cool' by peers. Many boys don’t necessarily want to be a doctor. There’s not as much fantasy or perceived income attached to that.” 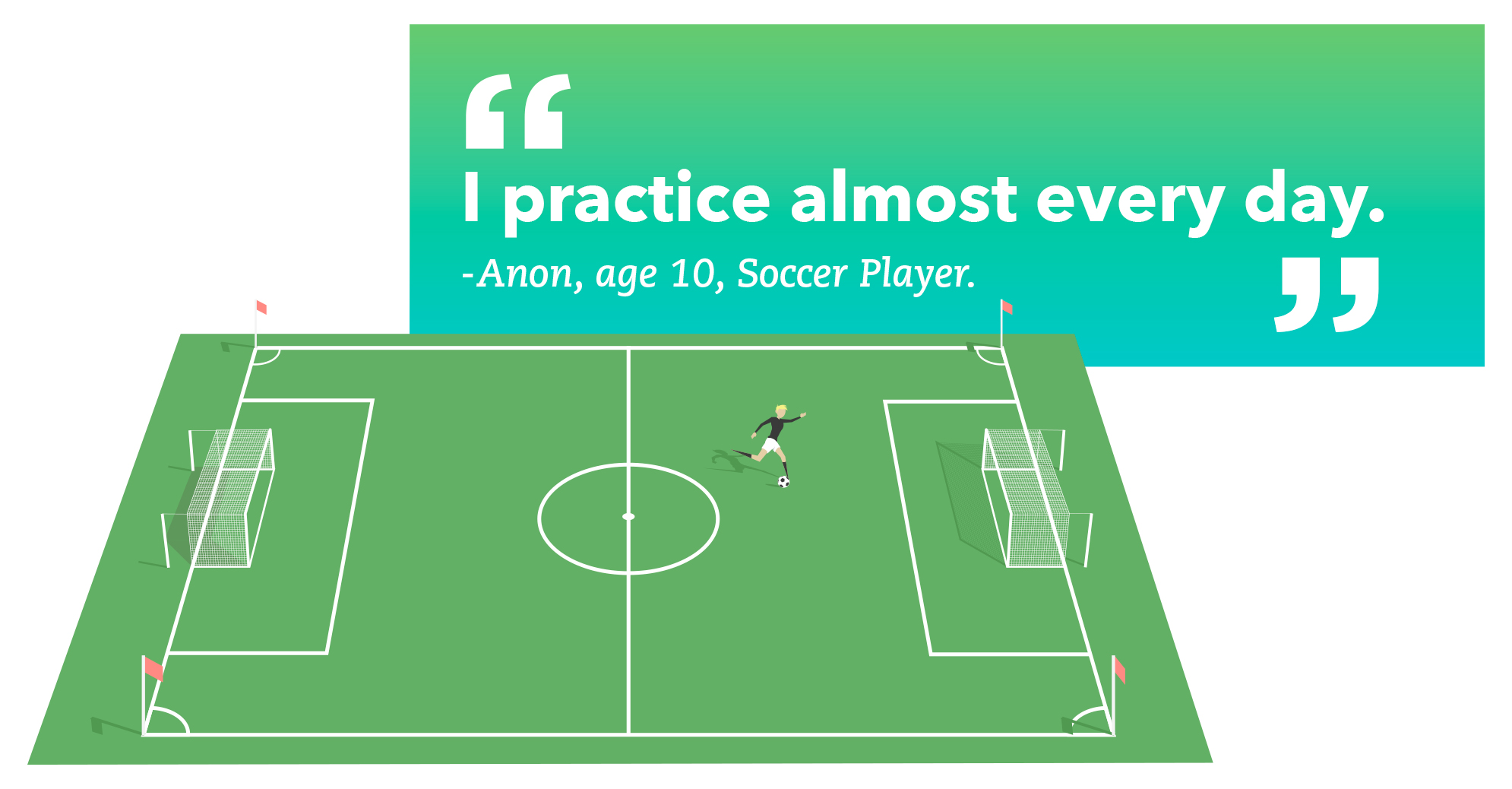 In all honesty, when we started this experiment, we expected to get nothing more out of it than a smattering of adorable pictures from children who were still young enough to dream big. We ended up with a data set that gave us a fascinating look into the lives, minds, and hopes of the next generation.

Dr. Saline aptly states, “It has to do with our expectations of boys and girls. And I think there’s a kind of freedom for girls to explore their creativity without fear of labeling or role confinement that many boys face.”

As we continue to redefine and explore what it means to be feminine, masculine, and human, it’s up to us—as parents, teachers, and role models—to continue to set and hold up examples for our children, to show them what they can hope to achieve and become.

What did you want to be when you grew up? Share your childhood dream jobs in the comments below!

Sources:
1. Dr. Sharon Saline, a child psychologist and the author of What Your ADHD Child Wishes You Knew: Working Together to Empower Kids for Success in School and Life

Written by
Courtenay Stevens
Courtenay cut her teeth (and occasionally her tongue) on the world of business when she was eight years old, licking envelopes to help her dad mail calendars to his clients. Ever since, she has fostered a passion for entrepreneurship, which makes small business one of her favorite topics to write about. When Courtenay isn’t writing, she enjoys podcasting about pop culture and attempting to keep up with her hellspawn (aka children).
Read More
Recent Articles 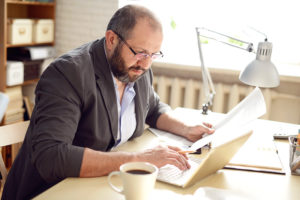 By
Sarah Ryther Francom
What Is a Term Loan?
Almost three quarters of American small businesses used some type of financing—including term loans—in 2016.1... 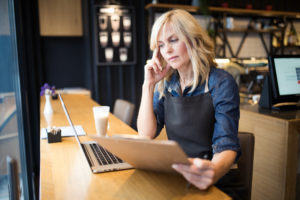 By
Courtenay Stevens
How to Create an Online Store
Thinking of setting up your own e-commerce store? We’ve got you covered. In 2016 alone,... 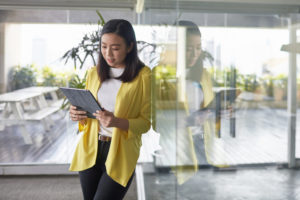 By
Chloe Goodshore
How to Open a Business Bank Account
Need a place to stash your cash? Just follow our guide to opening a small-business... 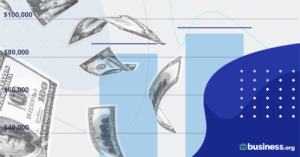 By
Kylie McQuarrie
Small Business Startup Costs: What Business Owners Spend in their First Year
When it comes to small-business ownership, you really do have to spend money to make...