For years, large companies have positioned climate change as a necessary byproduct of industrial progress.

The revolution marked the start of a new capitalist era and global warming. Now, 150 years later, big-business owners are shifting from denying climate change to promoting sustainability because of the economic benefits it provides. But is it too little, too late?

In the years since the Industrial Revolution, scientists have found that “industry” contributes to almost a quarter (23% in 2019) of greenhouse gas emissions—directly drawing a line from capitalism to environmental destruction.3

A damning report from CDP in 2017 found that 100 companies “are linked to 71% of global industrial greenhouse gases since 1988” with over half of those emissions traced back to “just 25 corporate and state producing entities.”4,5

One such entity, ExxonMobil, has misled the public on climate science since at least the 1970s.6,7 Behind closed doors, company executives acknowledged its “products would likely cause dangerous global warming,” according to recent studies.6,7 The company’s efforts attacked the work of scientists and climate change researchers, even as ExxonMobile outwardly helped fund the research.6 However, in recent years, the company has joined other complicit entities in a complete turnaround on climate change and begun to promote sustainability.6

A few weeks ago, Blackrock Chairman and CEO Larry Fink wrote in his annual letter to CEOs: “We focus on sustainability not because we’re environmentalists, but because we are capitalists and fiduciaries to our clients.”8

The firm has over $10 trillion in assets under management as of January 2022 and has holdings in major corporations including Apple, Microsoft, Amazon, Tesla, Home Depot, and Exxon.9,10 Those shares give Blackrock sway over corporate policy, and Fink’s annual letters to CEOs have influenced more companies to embrace environmental, social, and corporate governance issues.11

It is clear that climate change is an industrial—and capitalist—dilemma because company shareholders didn’t necessarily want to be environmentalists and were more concerned about the bottom line. But now it has been demonstrated that sustainability is good for business and can support long-term growth and drive new consumers to the company.

“If you can claim carbon neutrality in a serious way for your customers, there’s a lot of interest, especially with younger generations, to support businesses that are taking this seriously,” Tom Drennen, a professor of economics and environmental studies at Hobart and William Smith Colleges, told Business.org in an interview.

Although its greater sustainability programs leave a lot to be desired, Amazon cofounded The Climate Pledge with Global Optimism in 2019 and committed to net-zero carbon emissions for shipping and general operations in the next couple of decades.12,13 Seeing one of the largest companies in the world, one that has a global footprint, commit to sustainability is an important step.

What small-business owners can do

For small-business owners, the most important step is understanding the risks involved if the dilemma persists. Of course, business owners should take positive steps like joining sustainability programs and reducing their emissions to prevent further damage, but there are already detrimental effects of climate change, too, like extreme weather and natural disasters becoming more prevalent.

As Drennen confided in Business.org, choosing the right liability insurance is critical for small-business owners in this era of climate change. He noted that weather events—like heavy rain and intense storms—can damage businesses, and those without proper insurance coverage may struggle to rebuild.

Preparing for the worst now can save your business from extreme weather events, ensuring that you can serve your community for years to come.

In August 2021, President Joe Biden signed an executive order setting a goal for 50% of “all new passenger cars and light trucks sold in 2030 [to] be zero-emission vehicles.”17 This ambitious plan found support in the private sector with General Motors (GM) investing $35 billion in electric vehicles—a 75% increase from March 2020.18

These investments in electric vehicle manufacturing, infrastructure, and innovation are not just for the betterment of society; they are also meant to strengthen US market positions.19 By investing in innovation, the White House is intertwining sustainable interests with profitability, promising “good-paying” jobs while actively fighting climate change.19

It is possible to fight climate change with action from corporations and governments. “When we harness the power of both the public and private sectors, we can achieve truly incredible things,” Fink wrote in his annual letter. “This is what we must do to get to net zero.”8

Business owners are learning that sustainability can fit into capitalism: if business owners want higher profits, then they must invest in sustainable measures. And, as Drennen noted earlier, company owners that publicly push for carbon neutrality will see greater interest from consumers who are sustainability minded.

Already, we’re seeing major financial institutions pledge net-zero emissions by 2050 across their business portfolio.20 This group includes banks and investment firms like JP Morgan Chase, Citigroup, Goldman Sachs, and Blackrock. And in early February 2022, the Carlyle Group was the first private equity group to sign the pledge.21 Together, the Glasgow Financial Alliance for Net Zero represents over 450 firms with $130 trillion in managed assets that have pledged to become net zero.22,23

The capitalist dilemma should not be whether to reduce emissions and fight climate change. That has already been determined. Instead, it should be how.

Corporations and investors have the chance to reshape modern capitalism for the better by prioritizing sustainable initiatives and accepting climate change science. While Larry Fink’s 2021 letter to CEOs is a great step, he’s only one person. More investors need to step up to promote green business initiatives and the benefits of net-zero emissions.

The fact is, green business is good business. As Tom Drennen said, customers are more likely to buy from sustainable businesses. So what’s good for the environment is also good for businesses’ bottom lines.

Wondering what your business can do to fight climate change? We spoke to experts and came up with three actionable steps. 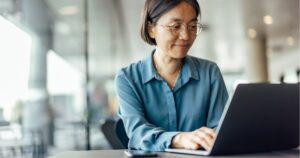 By
Chloe Goodshore
Best Credit Unions for Business 2023
Want your business to enjoy low fees, high rates and great service from a credit... 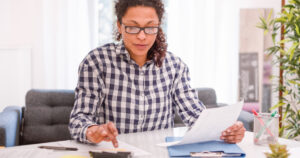 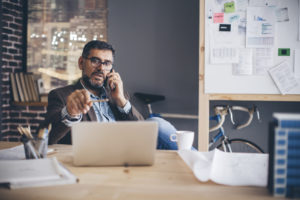 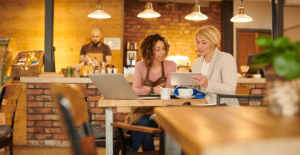